We are excited to launch a new hotel and pub website. This will give further reach to all hotels and pubs across Australia who are looking to find better options for their hotel and pub insurance. We also aim to add a weather alert notification system in the near future, which further adds to our proactive risk management approach and will be in a position to alert clients across Australia when significant weather perils are known.

check it out here;

Cyber Liability – Are you Protected?

No company is immune from the risks of cyber crime. In fact, this enterprise-wide issue affects small and large businesses alike.

The information age allows us to collect, store, and extract data around the globe 24/7, leaving companies more vulnerable than ever to cyber security threats.

When sensitive information gets in the wrong hands, it can result in significant out-of-pocket and reputational costs that can devastate the bottom line.

These events are a lot more common than you think.

Is your company prepared for:

Background: An employee of the Insured opened a zip file attachment to an email that deployed a variant of ransomware malware. All the files used to open the attachment were encrypted as well as the Insured’s dropbox files in the Cloud, including HR files and employee personal data. Engineers were able to carry on with their operations however all administrative tasks at the Insureds ceased.

Outcome: $5,000 for loss of man hours and IT expenses to repair systems.

Background: A former IT contractor allegedly logged-in remotely without authorisation and deleted files on the Insured’s server. They also embedded spyware and downloaded viruses onto the server. However, when the police interviewed the individual, he advised that all of his computers were stolen before the Insured’s computers were hacked.

Outcome: $8,000 in costs incurred while restoring and repairing the server damage caused by this incident.

Background: On two occasions in one year, the Insured’s computer system was affected by a CryptoLocker virus, which prevented the Insured from being able to operate as usual.

Outcome: $14,000 in IT expenses to restore the Insured’s systems back to the position they were in before the virus.

Background: The Insured’s system was hacked via an email they received carrying a Ransomware virus. The virus prevented them from having any access to emails and their network. The hacker held the client’s system to ransom and would only release files if the client paid $12,500. The fact that the client had numerous file shares and common storage areas made their system particularly vulnerable to attack and made it easy for the hacker to encrypt nearly every file in their system.

Outcome: $12,500 in ransom plus an additional $25,000 in IT expenses related to diagnosing the problem, decommissioning the old servers and installing a new network.

So, what actually is Cyber Insurance?

Cyber insurance is designed to protect businesses against a wide range of liability cyber exposures from relying on the internet, email, websites, computer programs, data and from storing private information about their clients.

Who should have it?

Any business that is dependent on critical data stored on computer systems, which could expose them to a cyber attack. (Hint – that’s every business!)

The targets of cyber attacks span a multitude of industries and cyber criminals don’t care where they steal private information from.

Existing insurance policies may be inadequate to respond to today’s digital exposures.

What does Cyber Insurance cover?

Cyber insurance is designed to respond to a variety of cyber risk exposures not covered under conventional insurances.

These include (but are not limited to):

Posted on December 07, 2018 | by Oliver Whittingham | Posted in Uncategorized 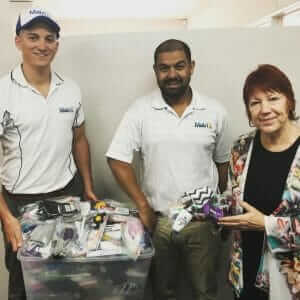 We look forward to continuing to donating to such a great cause.

Posted on December 03, 2018 | by Oliver Whittingham | Posted in Uncategorized

We are proud to announce that Matrix Insurance Group has been awarded the CBN Corporate Authorised Broker of the Year for 2018. This award recognises strong company growth, outstanding client service delivery, community involvement, product delivery, innovation and customer satisfaction. We would like to thank all our loyal clients for their support and of course our hard working team for their contribution. We would also like to extend a big thank you to the Community Broker Network and look forward to building on this with further success.

Welcome to the team Sarah!

Posted on February 01, 2017 | by Oliver Whittingham | Posted in Uncategorized

Matrix Insurance Group is excited to introduce Sarah Baptiste to our team. Sarah will be an integral part of our client service delivery and brings with her nine years of Read More…